i Oct 31st w No Comments x by Beth Blevins

Project SHARE, run by the Arizona Center for Rural Health (AzCRH), trains University of Arizona health sciences students as Certified Application Counselors (CACs) that provide information on enrollment through the Affordable Care Act (ACA) marketplace. Alyssa Padilla, who supervises the SHARE program for the Arizona State Office of Rural Health (AzSORH) under the AzCRH, said that the program helps not just the patients but also the students, who become more rural and health insurance literate. 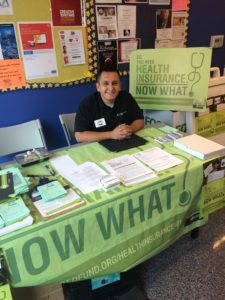 “SHARE gives the students a better understanding of social support services and how to connect individuals with those services,” Padilla said. Through SHARE, the students earn volunteer credits that allow them to graduate with distinction. But, more importantly, Padilla said, graduates of the program “are better equipped to answer patients’ questions about coverage on the spot.” To become a SHARE participant, students take five to 10 hours of online federal training in addition to in-person session training, Padilla said.

When surveyed afterwards, participants have said the program has given them a better understanding of the ACA, health insurance premiums and deductibles, and the value of expanding Medicaid in Arizona, Padilla said.

Lauren Dominick said she has already benefited from the program. Dominick, an MD candidate and Project SHARE leader for the UA-College of Medicine–Phoenix, joined last year hoping to develop the skills that will help her better serve current and future patients. “I have gained so much knowledge of how the marketplace works and how to navigate it,” Dominick said. “I’ve helped patients complete their ACA applications and seen the empowerment they experience as they take better control of their health care. The program opens up their opportunities to seek preventative health care rather than just when they have an acute, major issue.”

Unfortunately, Dominick said, as a medical student she has seen many patients with very advanced diseases who were unable to access care earlier. “This is heartbreaking, especially when their condition could have been prevented or effectively managed if they had had access to health care.” Dominick added, “Helping sign people up for insurance makes me feel like I am making a difference and hopefully having a positive impact on their health even before I see them in the clinic or the hospital.” 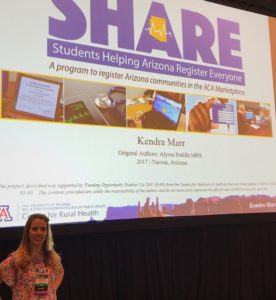 Kendra Marr, an MD/PhD student at the UA College of Medicine-Tucson and Tucson SHARE leader, said that another benefit she has found with SHARE is the “wealth of opportunities for collaboration with other clubs and services within the College of Medicine,” including the Commitment to Underserved People (CUP) health clinics. Marr has been working with the free, student-run CUP clinics to form a partnership so that SHARE can refer patients to them and vice versa, and has been holding her SHARE enrollment office hours at the clinics.

Project SHARE has benefited the university as well. “The University of Arizona is a White House Healthy Campus because of Project SHARE and UA Campus Health’s efforts to improve access to health insurance coverage,” Padilla said.

Typically, 15 to 25 students work for SHARE each year, Padilla said. So far, 90 students from the UA Colleges of Medicine, Nursing, Public Health, and Pharmacy have gone through the SHARE program since its inception in 2015.

In her role with the AzSORH, Padilla oversees the licensing, recruitment, training, and mentoring of the SHARE participants. Most of the funding for the program comes from SORH grants, Padilla said, with small additional amounts of funding from UA College of Medicine CUP, which pays for things like food for the students during their trainings.

Padilla said she hopes other SORHs will consider replicating Project SHARE. The AzSORH has created templates on the processes involved and how-to directions, which Padilla will provide to any interested SORHs. Meanwhile, Padilla said that AzCRH is planning to extend the reach of SHARE to remote areas of her state through partnerships with Critical Access Hospitals and rural faith-based communities.

Since the ACA has been in effect, Padilla said, the uninsured rate in Arizona has been cut in half (to 10 to 11 percent), similar to the national average. “It’s important to note that we have a conservative Republican governor, and we have expanded Medicaid,” she said. “Our hospitals are no longer in the red because we have patients that are now insured due to Medicaid expansion and the ACA.”

“Medicaid expansion has really helped our bottom line,” Padilla concluded. “State Offices of Rural Health support that effort and that message ‑ it can do wonders for our rural and underserved communities.”

i May 1st w No Comments x by NOSORH

NOSORH’s Policy and Program Monitoring Team (PPMT) is excited to announce an upcoming virtual conference titled State Coverage Initiatives Affecting Rural Communities. This four-part series will examine current and proposed state initiatives affecting Medicaid coverage, with a focus on the impact to rural communities. The four-day series will take place May 14-17, 2018 at 3:00 pm ET daily. SORH and their partners are encouraged to attend, as well as inviting anyone who has an interest in rural health policy.

The first two sessions will feature Harvey Licht of Varela Consulting discussing the landscape of state initiatives, including ACA marketplaces and Medicaid waivers. Session three will focus on ACA Marketplaces at the state level with presentations from leadership in both Alaska and New Mexico’s departments of insurance. Session four will focus on Medicaid waivers, highlighted by policy experts from Indiana and Kentucky. Sessions three and four will focus on state-specific examples of these initiatives in a listening session format, allowing attendees to ask questions during the webinar.

For more information on the terrific line-up of presenters, and to register, see the individual session flyers below:

Back to May Branch

i Mar 2nd w No Comments x by Matt Strycker

NOSORH offered an informative webinar on Improving Rural Health Network Adequacy in February.  In case you missed it, all the materials and recording have been posted to NOSORH’s website.  The Patient Protection and Affordable Care Act (PPACA) has changed the regulatory environment for health network adequacy. New regulations and guidance are being issued at the both Federal and State levels. The webinar explored opportunities for State Offices of Rural Health to participate in the new efforts and approaches to assuring that health networks, including Qualified Health Plans (QHPs) and Accountable Care Organizations (ACOs), have adequate providers and facilities.

As the PPACA continues to rollout, we see that special arrangements are needed to meet inadequate numbers of providers or facilities in rural shortage areas to ensure appropriate access to enrollees. SORHs are knowledgeable about services in these communities and are well placed to participate in efforts to assure appropriate rural health care.

There are several new initiatives designed to improve the regulation of health network adequacy nationwide.  There will be new opportunities at the State and Federal level for SORHs to address this issue with State Medicaid programs, State Insurance Commissioners and Health Exchanges.

Listen to the first webinar on the requirements for Network Adequacy and how SORHs can get involved and help implement strategies that makes the most sense for rural areas.  As this process unfolds, NOSORH will provide more learning opportunities to review the changes in the coming year.

Back to March Branch

i Feb 25th w No Comments x by Matt Strycker

i Jan 20th w No Comments x by Matt Strycker

i Nov 20th w No Comments x by Matt Strycker

ACA and You Webinar Presentation

i Nov 6th w No Comments x by NOSORH

In an effort to provide consistent medical care to thousands of underserved residents, South Carolina’s “Medicaid System” has implemented a statewide program designed to coordinate care and provide a medical home for some of its most at-risk residents.

Now in its second year, the Healthy Outcomes Plan (HOP) asked every hospital in the state to identify a predetermined number of low-income, uninsured residents who visited the emergency department at least five times in the last year, and who suffered from a chronic condition such as diabetes, cardiovascular disease, hypertension, sickle cell or HIV/AIDS.  The size of the hospital determined the number of residents they were required to identify, with 50 being the minimum for the state’s smallest hospitals.  All of South Carolina’s hospitals are participating in the program.  The state’s three largest metropolitan hospitals had to identify at least 750 residents.  “Activity always follows the dollar,” said Graham Adams, Ph.D, CEO of the South Carolina Office of Rural Health (SCORH).  “The hospitals were incentivized to get on board or they would lose the Disproportionate Share Hospital (DSH) money they were already receiving.  Plus, the state gave additional money to every hospital involved in the program.  Our 19 rural hospitals received 100% of their DSH money.”

Dr. Adams went on to say that HOP is particularly important in the rural areas, where residents are less likely to have a medical home and often wait until they are very ill before visiting an emergency department for care.  SCORH provided technical assistance to rural hospitals in the development of the program.  “Rural providers have a close relationship with their patients and as a result were more successful in identifying and bringing new patients into the program.”  The goal for the first year of HOP was to enroll 8,500 residents.

Now in its second year, Dr. Adams said the program has been beneficial because it provides a medical home and a system of care for people who really need it.  “It gives incentives for medical providers to work together for these folks well-being.  Controlling the chronic illnesses of our residents is one of the biggest benefits so far,” he said.  “Overall, it’s been a very positive thing.”

i Aug 26th w No Comments x by Matt Strycker

i Jul 31st w No Comments x by Matt Strycker

i Apr 30th w No Comments x by Matt Strycker

Office of the Press Secretary

The Affordable Care Act is working.  It is giving millions of middle class Americans the health care security they deserve, it is slowing the growth of health care costs and it has brought transparency and competition to the Health Insurance Marketplace.

HEALTH CARE BY THE NUMBERS 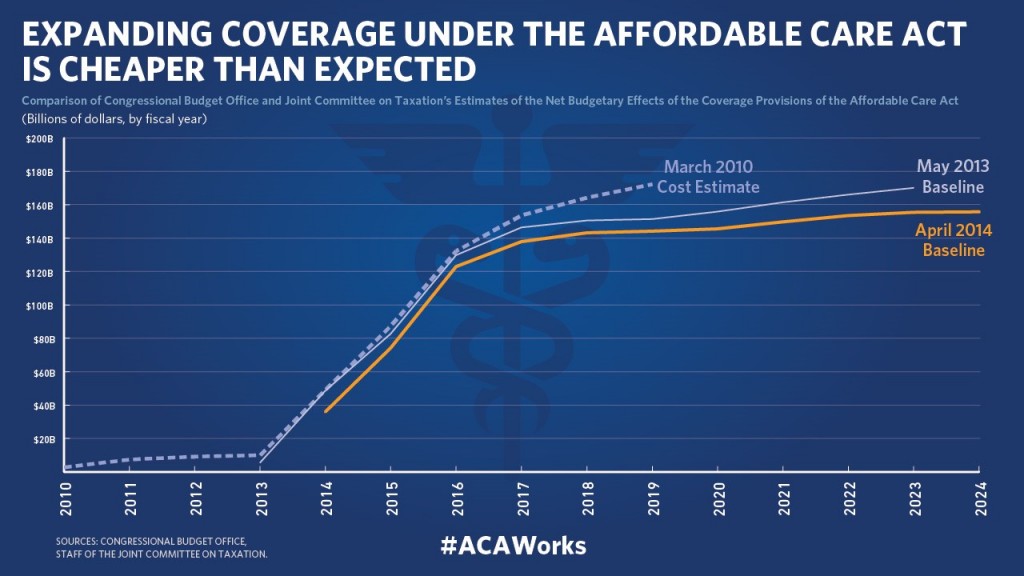 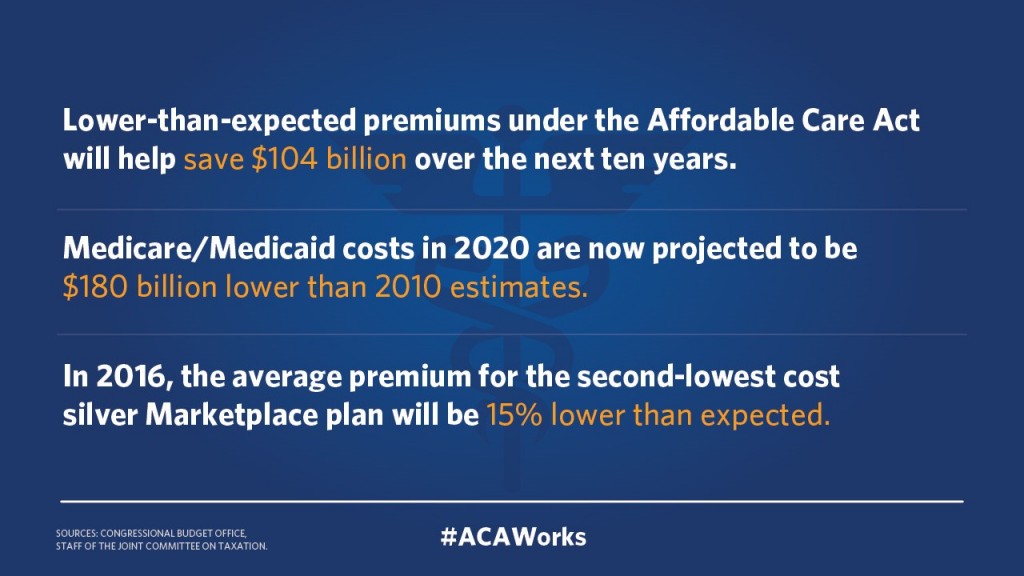 THE SECURITY OF HEALTH INSURANCE FOR MILLIONS OF MIDDLE CLASS FAMILIES