In rural and frontier Oregon, as in many other parts of the country, the aging population is rising, bringing new challenges to healthcare and other services. To address these needs, the Oregon Office of Rural Health (ORH) hosts the annual Forum on Aging in Rural Oregon.

“We bring people together who are working on aging issues, to share best practices and learn from each other,” said Robert Duehmig, ORH Interim Director. “It’s important that Oregon’s rural and frontier communities are supportive of the aging population, so folks don’t have to leave when their care needs increase. There’s not a lot of assisted living or senior homes in rural and frontier communities, so when somebody has to leave their home for care, it usually means going quite a distance.”

The Forum was the vision of Scott Ekblad, former ORH Director, Duehmig said. “His vision was to highlight and share rural organizations’ programs with other communities that have similar resources and geographies.” In this way, he said, “rather then keep that innovative work siloed, the Forum offers a way for other folks to hear about this great work—there are a lot of really cool programs and projects going on in rural and frontier communities.”

To address as many aging-related topics in as many communities as possible, each year the Forum is held in a different region of the state, said Rosalee Locklear, ORH Field Services Program Manager. “We rotate to a different area of the state to highlight communities in and around that specific region,” she said. “And we rotate committee members to bring in folks from that local area, because they know the needs of their community best, and they help us spread the word about the Forum.” 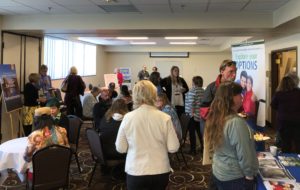 Participants at the third annual Aging in Rural Oregon forum network in the partner room.

The topics chosen for each Forum are based on evaluations from the previous year’s Forum, in conjunction with feedback from the Planning Committee, Locklear said. “After the Forum we ask attendees to fill out evaluations to understand what they liked and what they want to see in the future. Then the Planning Committee and I discuss the data,” she said.

In the evaluations, attendees also share how they will use what they learned at the Forum. After last May’s Forum, which included presentations on loneliness and grief, aging and disability, and clinical considerations for cannabis use, their comments included: “I’m more motivated to work harder against loneliness and social isolation in our community,” and “The pharmacology was helpful, knowing when a client is taking too many medications and who to contact regarding this.”

Tied in with and awarded after the annual aging forums, ORH’s Elder Service Innovation Grants are intended to fund new projects or those building upon existing services. “Through the grants, we’re able to support small organizations that do innovative projects,” Locklear said. “There’s not a lot of funding for those sort of programs.”

The Forum is funded through three sources: paid registrations, organization partnerships, and the Medicare Rural Hospital Flexibility Program, Duehmig said. “We absolutely have to have partners to make it possible,” Locklear said.  “We like to reach out to organizations in communities where we host the Forum to showcase their support of this event.” Partners have included hospital and health systems, health care organizations and foundations, government aging organizations, and education institutions, she said.

Right now, ORH is the only State Office of Rural Health (SORH) that hosts a forum dedicated to aging in rural and frontier communities. “To my knowledge there are not a lot of SORHs that are specifically addressing their aging population this way, but other states are interested in supporting their aging communities,” Locklear said. ”For example, the Washington SORH has done an evaluation of their state’s home health and hospice agencies.”

“I’d be happy to have a conversation about what we do with anyone who is interested, and to help other people do something similar,” she added.

When ORH first began the Forum on Aging in Rural Oregon, Duehmig said, they did not know it would be an annual event. “But as long as the need is out there and we can meet that need through this particular mechanism, we will keep doing it,” he said. “I think the support for it is still strong and the need for that kind of information remains vital.”

Yes There’s an App for That!

Want to know what to expect at an Oregon Office of Rural Health (ORH) conference? Check the ORH app! The app offers information on the ORH-sponsored Oregon Rural Health

Conference and Forum on Aging in Rural Oregon, including meeting agendas, speaker bios, and sponsor information. The app also includes information on ORH and ORH staff, and instant access to ORH videos and ORH’s Twitter and Instagram accounts.

According to Robert Duehmig, ORH Interim Director, the app was created as part of ORH’s larger goal to become more paperless. “We don’t want to waste paper so we can be environmentally sound,” Duehmig said. “But the other reason is that our conferences are never near the office, so we would have to travel with all that stuff or ship it out.” Additionally, he said, “more and more people don’t want to go to a conference and bring home tons of stuff, so we make it easier for them to view that information on their mobile devices.”

The content of the app changes with each new conference. Since the last conference (as of this writing) was the ORH Rural Aging Forum, it is now featured on the app.

Currently, ORH is the only SORH that offers its own app and it is one of the few apps devoted to “rural health events.” The app is available on both Android and iOS platforms. (Search for “Oregon Office of Rural Health” in either app store).