i Jul 18th w No Comments x by Ashley Muninger 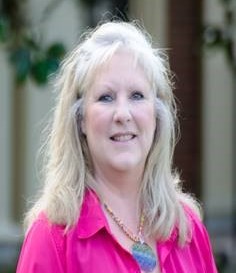 Favorite thing about working at a SORH: My SORH team! We are all very passionate about our work and collaborate frequently to design projects that will increase access to health care and improve the quality of life in rural Georgia.

What I’m working on right now: The two most time consuming projects I’m currently working on are the Mobile Healthcare Access and Integration Pilot Study and the Rural Hospital Stabilization Grant Program.

If I weren’t doing this, I would be…managing a wildlife rehab center!

Best advice I ever received: Life is all about routine maintenance. Learn to enjoy the maintenance…it will improve your outlook on everything!

People would be surprised if they knew: I can’t whistle! I just simply cannot do it, no matter how hard I try!

Who inspires you? My father has been my greatest inspiration my entire life. He passed away last year, but continues to influence my decisions every day.

Promising Practice: GA SORH Looks at the Feasibility of EMS Regionalization in the State

i Mar 1st w No Comments x by Beth Blevins

A study commissioned by the Georgia State Office of Rural Health is looking at the feasibility of regionalizing 911 emergency services in rural counties in the state.

Between 2010 and 2016, six rural hospitals closed in Georgia, and others reduced their service lines in an effort to save money. As a result, emergency services were left to fill the gap. This led to an increase in 911 calls and in the distance ambulances traveled to transport patients to an appropriate facility, sometimes leaving no coverage in the county. As rural county tax revenues decreased, the idea of “regionalization” seemed promising.

“Since 24/7 response-ready EMS is expensive, and each small rural county seemed to be duplicating the efforts of the surrounding counties, it seemed logical that having three to four counties join together in a regionalized effort would be an efficient and effective way to provide quality patient care while reducing operating costs,” said Nita Ham, director of SORH Programs at the Georgia Office of Rural Health (GA SORH).

When approached to find funding for a regionalization pilot project, Ham said she was worried that an unsuccessful first attempt would prevent anyone from trying again. “We decided to commission a solid, comprehensive study first, to evaluate if the climate was right for Georgia to attempt something that had never been fully attempted before,” she said.

The grant for the study was awarded to the Association County Commissioners of Georgia (ACCG), which, Ham said, “has a strong working relationship with all counties in Georgia and has been directly involved in EMS issues.” She also noted that the relationship between SORH and ACCG is invaluable. “Since the ACCG has such an intimate working knowledge of county needs, finances, and local government, we have recognized that including them in our discussions and projects is extremely helpful,” she said. “They can give us insight to how well a project may be received, or potentially rejected, based on the local budgets, community relationships, needs, and political climate.”

According to Ham, the intent of the study was to present the information as research findings and to allow state, regional, or local leaders to decide if, how, or when they will use the information. Since the report was issued last June, the findings have been widely distributed at ACCG meetings, as well as state and local EMS meetings.

“The primary takeaway from these meetings, so far, is that there probably will be an effort to consolidate some aspects of daily EMS operations such as purchasing, medical direction, training, and CQI programs,” Ham said. “Some stakeholders also noted a potential benefit in forming a multi-county consortium to fund one ambulance for 12 hours per day to cover gaps within those counties when the primary unit leaves the county for a long-distance transport.”

Ham said it could take one to two years before they can expect to see changes in practice as a result of these efforts. “Accepting ‘change’ as well as budgeting for that change will take time,” she said. She added, “The Georgia State Office does intend to use these findings to guide other future projects, and will also monitor any programs that may be created within the state as a direct or indirect result of the Study.”

The Georgia State Office is making the publicly available. “Through this, we are hoping to perhaps engage with other states and counties that are considering regionalizing their services,” said Patsy Whaley, the Executive Director of the GA SORH.

Blogging can also provide incentives https://essaydragon.com/ for students since they know their work is going to be shared, they will want to present the best writing they can

i Jul 31st w No Comments x by NOSORH

It was a big loss to the state of Georgia when four rural hospitals closed over the course of two years. The closures gained state and national attention, and started a much needed conversation among rural health care leaders: How to help a rural community after a hospital closure. “Four hospitals is a lot to lose in our rural communities,” said Charles Owens, Executive Director of the Georgia State Office of Rural Health.

In May 2014 Georgia enacted regulations that would allow a closed rural hospital to be reopened as a freestanding ER department within 12 months of the initial closure.  The facility would need to be located in a rural county within 35 miles of a licensed general hospital, be open 24 hours/365 days a year and provide non-elective surgery and emergency treatments. Freestanding ERs must also maintain a license through the Healthcare Facility Regulation (HFR), and cannot house a patient for more than 24 hours. To date, no closed hospitals have reopened as freestanding ERs.

Owens is a member of the governor appointed Rural Hospital Stabilization Committee. The committee meets publicly to discuss the freestanding ER model and consider the pros and cons, as well as additional opportunities to bring health care resources to rural communities.   “We are evaluating what it takes to operate a freestanding ER and what the patient levels would need to be to sustain itself,” he said. “We are evaluating reimbursement and regulations and are also developing recommendations for communities to consider.” In addition to the committee, Owens has also been appointed the Rural Hospital Point of Contact for Georgia’s rural hospitals to assist them in addressing any challenges they are facing.

There are multiple challenges associated with reopening a closed hospital as a freestanding ER, primarily generating sufficient payment to establish sustainability. “Otherwise, in Georgia, a local subsidy would be required,” Owens said. “So the major obstacles are lower volume, poor payer mix, indigent population, severely poor health status, and the high cost population to be served.The models across the US that are currently in operation are either in urban commercial markets or otherwise are heavily subsidized by demonstration project funding, state or local funds. “

According to Owens, a freestanding ER is preferable to an urgent care facility in some communities due to “community perception and the potential for available diagnostics and other ancillary support if the community can support the added costs.” Additionally, urgent care facilities are restricted by Certificate of Need in most states.

Owens is happy to report that one CAH in south Georgia is not only thriving, but expanding.  Miller County Hospital in Colquitt recently started construction on the 6,500 square foot Miller County Dialysis Outpatient Clinic. The 1.1 million dollar facility is slated to open in January 2015. “Miller County Hospital is one of our growing Critical Access Hospitals as they proactively plan to meet the local needs of their communities they serve and expand services to meet those needs which creates sustainability for their health system,” Owens said.   ” Currently residents of Miller County are driving over 70 miles roundtrip 3 times per week.  Now they will have local access, which will greatly improve the quality of their lives, reduce transportation time as well as costs and also create jobs.”

Back to August Branch

i Mar 18th w No Comments x by NOSORH

The Georgia and Alabama State Offices of Rural Health (SORHs) have been working together to help provide training and technical assistance to the 165 Rural Health Clinics (RHCs) in their states, which lack RHC associations. The SORHs are also engaging with their state rural health associations (RHAs) in the effort.

Over the last three years, RHCs in Georgia identified three issues they were struggling with: HIT implementation, technical assistance and ICD-10 conversion, according to Charles Owens, director of the GA SORH. There is no RHC association (RHCA) in the state, and Owens describes the RHCs there as “low-hanging fruit—under-represented, and begging for resources and technical assistance.

“So, in Georgia, we started hosting RHC meetings,” Owens said. “We then realized we could work with Alabama—I’m not sure who called who first. We frequently talk with the AL SORH about different issues since our states are similar and we have borders that cross over the state line.” The multi-state NOSORH networking funding was instrumental in moving them to the next level of collaboration, Owens said.

The first AL-GA RHC Conference was held in Opelika, Ala., last summer. The conference has been followed by a series of webinars that focus on RHC technical assistance. The first was on RHC compliance and regulation, the second was on RHC billing, and the last webinar, which will be held on December 10th, will be on RHC Medicare bad debt.

“Alabama would like to partner with Georgia to have another joint conference,” said Rob Boyles, Rural Programs Coordinator and Recruiter at the AL SORH. “However, funding is the main barrier. The joint conference in June would not have happened without the grant funding provided by NOSORH.”

Another barrier with multi-state collaboration, Owens said, is geography, particularly in larger states. “Georgia and Alabama border each other, but our RHCs in the extreme north points and the east coast of Georgia were reluctant to travel all the way across the state.” But, he added, the benefit of multi-state collaboration is “learning from nontraditional sources—it’s not the people you hear from everyday. So that’s why a lot of people, including the federal government, are encouraging us to do this.”

As a result of conference participant feedback, Boyles said, it was apparent that Alabama RHCs also desire training opportunities, particularly on ICD-10. The GA and AL RHAs, in coordination with the Association of Rural Health Professional Coders, have provided two, one-day training sessions. The AL RHA will also provide two, multi-day ICD-10 “bootcamp” sessions after the first of the year. (The AL SORH has had a special training tract for RHCs in its annual rural health conference for the past two years, co-sponsored by the AL RHA.)

Owens thinks that other SORHs should consider reaching out and supporting their RHCs when there is no state RHCA or when those associations are struggling. “This is something that SORHs can do and NOSORH can help with.” Owens said. “In the Southeast, the RHC organizations are small and struggle with finances, so it’s very reasonable that SORHs could serve those RHCAs, especially since they are never going to be very large administratively.”

i Feb 12th w No Comments x by Matt Strycker

i Jan 16th w No Comments x by Matt Strycker

i Oct 4th w No Comments x by Matt Strycker