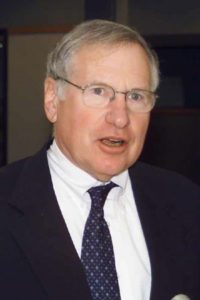 During his distinguished 35-year career, Jim Bernstein formed the first State Office of Rural Health (North Carolina) and served as president of the National Rural Health Association. He was also a model mentor for many leaders in the national rural health movement.

Upon Jim’s death in 2005, the National Advisory Committee on Rural Health and Human Services (NACRHHS) decided to honor his efforts to improve health care in rural communities. “Throughout his life, Jim remained an innovator and a motivator, helping local leaders and communities to come together to find local-based solutions to their healthcare problems,” the NACRHHS resolution honoring Jim stated. “Rare is the leader who so many would claim as mentor and friend.”

The impact of Jim’s leadership stretched far beyond his home state of North Carolina – he inspired hundreds of people throughout the country and helped create the next generation of rural health leaders. “What was magic about Jim was that he could work with such a wide breadth of people,” said Nancy Lane, a healthcare management consultant. “He encouraged people to tackle the impossible, all while making it look like fun … and adventure.”

Jim Bernstein and the early leaders of the State Office of Rural Health movement were masters of change; they knew how to work within existing policy frameworks and built sustainable programs that addressed longstanding problems. It is that philosophy that dedication that serve as the foundation of NOSORH’s efforts to cultivate the next generation of rural health leaders.

State Offices of Rural Health are encouraged to utilize the resources of the NOSORH Educational Exchange Program to develop and refine the qualities, abilities, skills and activities which were indicative of Jim Bernstein’s champion leadership: