Behavioral and other healthcare providers in rural North Carolina are getting connected to the statewide health information exchange thanks to the state’s Office of Rural Health Information Technology (ORH HIT) program.

The ORH HIT program evolved from the North Carolina 2015 Health Information Exchange Act (HIE Act), which mandates that healthcare providers that bill for Medicaid or receive state funds for services must connect to NC HealthConnex, the statewide HIE, by June 1, 2019, to continue to receive payments.

“The ORH already saw a need for more HIT support, but the HIE Act made a compelling case for a team to help smaller, rural providers with HIT needs,” said Lakeisha Moore, HIT Program Manager at the NC ORH since August 2017. “We work closely with the NC HealthConnex team to support all healthcare providers, especially rural/safety net providers.” 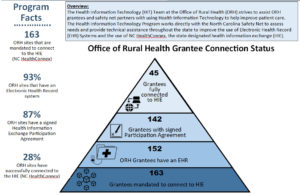 Last year, the HIT program offered the Behavioral Health EHR Funding Program, and 243 providers applied to get financial as well technical assistance to purchase an EHR and get connected to the state’s HIE, according to Allison Owen, NC ORH Deputy Director.

The grant offered three tiers of funding, from small to large providers, Moore said. Of the 243 behavioral health providers that applied, 178 were awarded. “The majority of this funding was awarded to organizations with 11 or fewer providers, which was encouraging for us, because it showed that we were helping a lot of those smaller provider practices that might not be able to invest in EHR technology.”

In the future, the HIT program hopes to offer grants to providers that were excluded from Meaningful Use funds such as Long Term Post-Acute Care Providers and Home Health Care Providers, Moore said. “We still find providers whose patient records are still on paper and we have to meet them where they are.” Other providers have implemented an EHR but need additional help in making the switch from fee-for-service to a (CMS) value-based care model, she said.

Moore attributes the HIT program’s success to the many partnerships it has forged. For example, her office reaches out to rural physicians through partnerships including the state’s Primary Care Advisory Committee, Medicaid listservs, Medical Society, and Area Health Education Centers (AHECs), as well as via social media channels and marketing tools. The Rural HIT Team meets regularly with members of the HIE Authority, along with the state’s AHEC staff, to share information and update one another on the status of key joint initiatives, Moore said.

“We have a really good relationship with the NC AHEC and their technical team,” Owen added. “We look at how we complement each another with our strengths and our skill sets. We come together to talk about challenges and successes, and we’ve had many brainstorming sessions. I would recommend that other states look to AHECs because often they are really strong for technical expertise.”

NC ORH HIT receives 90/10 funding—90% CMS dollars with a 10% state match, distributed through the state’s Medicaid HIT plan, Moore said. The program is in its second two-year funding cycle and will work with the Medicaid HIT team managers to update performance measures in July, the middle of the current cycle, Moore said.

“I’m excited that our Medicaid HIT team reached out to ORH and thought this was a program worth investing in,” Moore said. “I feel that other states may want to collaborate with their Medicaid team because that’s exactly how we received our funding and continue to receive our funding.”

Moore concluded, “Our program has been primed for more opportunities to support rural healthcare providers with Health IT, with a lot of the changes in our state and nationally. Providers need to utilize EHRs and HIT to help better take care of their patients and for population health management.”

Owen agreed, saying that telehealth will become more and more important, especially in rural areas. “Our state didn’t expand Medicaid, but we have transitioned to a managed care framework—we’re right in the heart of that,” Owen said. “One thing managed care organizations (MCOs) have to do is demonstrate that they can provide a broader range of care for their Medicaid population. Telehealth, we think, will be key in helping MCOs demonstrate that they can provide that access. Great opportunities abound!”