Teaching rural providers to be better advocates for their patients and their communities was the goal of an innovative program conducted recently by the Colorado Rural Health Center (CRHC) in partnership with the Center for Creative Leadership (CCL).

“Through the Rural Colorado Primary Care Leaders (RCPCL) program, we worked to educate 48 rural primary care providers on how to create grassroots advocacy efforts in their community,” said Michelle Mills, CEO of CRHC. “The ultimate goal of the program was to create a peer network of rural providers in the state.”

“CCL approached us after they received a grant from the Colorado Health Foundation (CHF),” said Sara Leahy, CRHC Director of Business Development. “Some of CCL’s staff members had worked with another State Office of Rural Health, and one of CCL’s headquarters is in Colorado Springs,” Leahy explained. “With this program, their goal was to work with primary care providers—MDs, DOs, advanced practice nurses, physician assistants, dentists, and dental hygienists—who practice in rural areas of Colorado.”

The CHF grant covered the $10,000 tuition for each participant, as well as travel expenses, lodging, and meals, Leahy said.

CRHC helped find the program participants. “We started off with targeted marketing to clinics and practices that were engaged with CRHC, then expanded our marketing to a broader outreach to all our membership,” Leahy said.

The participants met in three different learning sessions over the course of a year, Leahy said. “Each session was divided into two cohorts, so that two providers from the same practice could participate.”

The first session, held July 2018, focused on participants’ communication styles, teaching them practice tools like giving and receiving feedback, Leahy said. The second session, held November 2018, worked to improve their ability to lead others and to work collaboratively, she said. The third session, which took place over two days in March, helped the providers develop policies to lead their community, she said.

At that last session, Kelly Erb, CRHC Policy Analyst, spoke about public policy in Colorado. “We discussed the budget and the big bills that are currently moving through the legislature,” Erb said. “Then we discussed how providers can actually participate—whether through developing grassroots activities, writing letters to the editor, hosting community meetings, or testifying at the capital. We explored all the opportunities they have to interact with the political system both locally and on a state level.”

By the third session, participants also had completed a Capstone project, Leahy said. “The aim of the Capstone project was for them to make an impact on policy that affected their own local town and community—something that would affect not just themselves, not just their practice, but everyone that they touched base with.” Each participant had a coach who worked with him or her a few times a month on those projects, Leahy said. 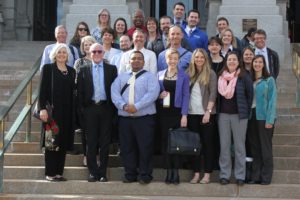 Colorado providers who participated in the RCPCL program gather at the state capital in March to meet with their legislators.

On the second day of the third session, participants were able to put their Capstone projects—and all they had learned in the RCPCL program—into action. “We brought all the providers to the state capital, where we set up meetings with their local representatives and with the state health committee,” Mills said. “It really gave them an opportunity to use those leadership skills they had learned in the program.”

In addition, Leahy said, the group was split into house districts, and within those small groups they brought forward three to five talking points to discuss with their policymakers. “They did a great job of planning who would talk, and making sure they went in there with ideas and objectives,” Leahy said. The topics they discussed that day included increasing access to quality broadband in rural areas, support of more equitable and adequate payment to rural facilities from Medicaid, and integrated care barriers with telehealth, Leahy said.

“Ultimately we prepped them to say, ‘this is the beginning of a relationship, and we’re going to be resources for one another,’” Leahy said. One provider was so comfortable with the visit that he ended up taking his state senator out to lunch, Leahy added.

Though the RCPCL sessions are over, Leahy said the effects of the program will continue. “That last day, even though the program had wrapped up, folks talked about how they can continue to work collaboratively with one another,” she said. “They want to stay engaged.”

“The providers have created a relationship with their local policymakers and are now empowered to use that relationship in advocating for issues important to them,” Leahy continued. They also can use those skills locally, with their own colleagues, she said, “in activities like building short-term and long-term strategic plans for their clinics.”

“This program was super helpful in engaging the providers, and I think that it will trickle down to the community level, giving them more of a presence within their communities,” Mills concluded.

Does your SORH have a “Promising Practice”? We’re interested in the innovative, effective and valuable work that SORHs are doing. Contact Ashley Muninger to set up a short email or phone interview in which you can tell your story.