Using Lean, a concept originally developed to eliminate waste in Japanese manufacturing, the New York State Office of Rural Health (NYSORH) recently embarked on a project to find more efficiency in the way its operates. The effort was part of the New York State’s broader Lean Initiative. 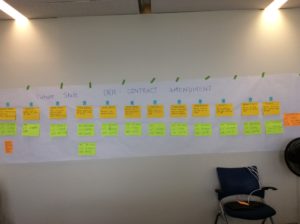 “This seemed very bureaucratic when we first began and we were not entirely enthusiastic about it,” said Karen Madden, NYSORH Director, “but we knew that it was something that we needed to do. So we decided to have open minds about it. We took a lot of time to be prepared and reviewed all of our data prior to our first Lean meeting, which allowed us to hit the process running.”

Although the New York State government (NYS) began its Lean efforts in 2013, it was the first time that NYSORH had used Lean. “It hadn’t gotten to us yet,” Madden explained. “Some of the projects they did were high profile and larger scale, and things that had very long processing times. But the eventual goal is to have every person who works in the NYS Department of Health trained on Lean or have them do at least one Lean project.”

For its first effort, NYSORH applied Lean principles to how it develops amended contracts, with the goal of eliminating excessive back and forth with contractors on contract requirements, Madden said. “It ended up improving our process, which we initially didn’t think needed improving, and was a great team building exercise,” she said.

Although completed last summer, NYSORH continues to apply Lean principles to its contract work, Madden said.  “We continue to monitor each step of the process and compare actual times with targets that we established as part of our Lean process,” she said. “We identify outliers and discuss the issues that are causing delayed processing. Additionally, we periodically review our guidance to our grantees because that was something that we improved and that helped improve the timeliness of our approvals.” 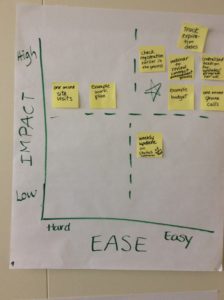 Lean also has been used in other state government agencies, including Iowa and Colorado, and federal agencies including the U.S. Environmental Protection Agency.

Although NYSORH has received no additional funding for its Lean work, Madden said, “Lean has become part of how we operate now.”

When asked if other SORHs should use Lean principles, Madden answered, “We all have processes that we need to follow that we don’t necessarily have much control over, but there are likely ways that the process can run more smoothly if you take the time to break it down and find out where things slow down and why.”

“It doesn’t take a formal process or facilitator to do that,” Madden added. “It just takes a little time and an open mind to maybe do things differently and get out of the ‘that’s the way we’ve always done it’ mindset.”

“We are all part of larger organizations and need to do things that we don’t necessarily want to do, but very often something that seemed negative can be very positive if you are fully present,” Madden concluded.