Loan repayment is a tool to recruit providers to shortage areas. In New Hampshire, recent legislation has boosted its State Loan Repayment Program (SLRP) so that it can be used more broadly and for a wider range of providers. 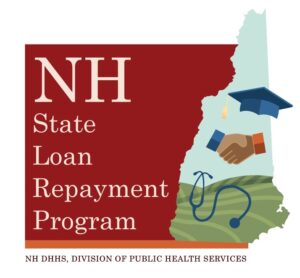 “About five years ago I asked my peers how they got more workforce funding in their states, and every one of them told me it was the function of partners coming together and picking one to five legislative priorities,” Druzba said. “That’s how they got money and how they started to gain momentum. That’s what we did in New Hampshire.”

The coalition began after a conversation with the Bi-State Primary Care Association (Bi-State) about what investments should be made to strengthen the healthcare workforce there. Increasing funding for SLRP quickly became the focus of their efforts. In addition to Bi-State, more than fifty organizations eventually joined the coalition.

When it came time to lobby before the state legislature, “the people who coordinate the coalition decided which one of that group would testify and made sure there were people in the coalition who were subject matter experts,” Druzba said. “The New Hampshire Hospital Association and leaders of FQHCs spoke about SLRP, and directors of nursing homes advocated for the parts of the bill involving Medicaid funding.”

For her part, Druzba served as the “facts person,” she said. “As a state employee I can’t advocate for specific bills, but I am allowed, with permission, to testify factually about programs. I talked about why SLRP is a good investment, what we know about it as a tool for recruitment and retention, and I shared data about participants.”

The resulting legislation increased the annual SLRP budget from $250,000 a year to $6.5 million over two years. In the first stage of the expansion, the SLRP program is adding primary care RNs (at already eligible sites), Hospitalists at Critical Access Hospitals, and licensed school psychologists who serve Medicaid-enrolled students.

“I haven’t seen anyone else doing hospitalists (with their SLRP programs),” Druzba said. “And including Medicaid school psychologists is also very unique. There is a shortage of them here and children who had qualified to get Medicaid services in schools were going without.”

Previously school psychologists in the state were licensed by the Department of Education, Druzba said. “Now they will be licensed as health providers with the Board of Psychology, which means our office won’t have to do any extra work around credentialing or vetting anybody.” (NH SORH administers the SLRP program.)

The next phase of the expansion in January 2021 will create a pilot loan repayment program for private practice dentists who serve a set amount of Medicaid clients, as well as loan repayment for behavioral health providers at eligible sites who are under supervision to acquire their license.

“The legislation also created a new position in our office (but we are at a hiring freeze because of the pandemic) and we got a promotion for an existing staff member, which is moving forward,” Druzba said.

Because of the pandemic, $4 million was taken from SLRP funding this year, Druzba said. “So we aren’t doing the level of work we would do if we had the entire $6.5 million,” she said. “But I figure even if they take $4 million out, it’s still $2 million more than I had. And so many more people now understand and appreciate the importance of SLRP. The floor of SLRP funding has been raised – it’s all incremental.”

After SLRP funding legislation passed last fall, NH SORH ran a SLRP Summit in January to get stakeholder input on ways to expand SLRP to cover more provider and/or site types. “The Summit gave everyone a baseline understanding of the program and its purpose, brought together a lot of people who have never met but have common goals, and gave us new ideas for the program,” she said. In addition, “there is an ongoing Dental SLRP Advisory group that was formed after the Summit to help us create a private practice dentist pilot.”

In terms of replication, Druzba said that any SORH could do this, especially considering how tiny her office is (there are five staff members in the SORH and Primary Care Office, combined).

“It didn’t cost me any money to do this work—what it cost was an investment in relationships,” she said. “This work was done because it was led by partnerships, but also because of the reputation our office has. When we were asked for our opinion on things and for data, we gave it, and they listened and valued our insight and expertise.”

“You can leverage all of the points in an existing system, but ultimately there will be places that simply need more capacity and resources,” Druzba continued. “In order to get those resources you need a coalition to focus on a set of specific policy goals with a funding ask, and united in their messaging.”

“If groups like workforce coalitions have a conversation on what their strategy is and they coalesce around it and use consistent communication, then they can get traction in their legislature or governor’s office, and get the support to make investments in various kinds of workforce programs,” she said.