The NOSORH Annual Meeting is next week in Boston! The planning committee has once again put together an incredible agenda. We look forward to seeing you there!

Corporate sponsors are not only an important resource for funding for the mission of NOSORH, they are experts in rural health and often partners to the State Offices of Rural Health. This important work will be featured in a series of articles leading up to the NOSORH Annual Meeting.

Since its establishment in 1967, Hall Render has become one of the largest health care law firms in the country and continues to grow. Over 200 attorneys and advocacy specialists provide legal services on all matters of health care, including rural health issues, to over 1,500 clients in 45 states. They represent rural health care systems, critical access hospitals, rural health clinics, and federally qualified health centers, among others. Read More

NOSORH is collaborating with Impact! Communications to help focus the “Power of Rural” messaging, enhance resources and broaden the reach of National Rural Health Day (NRHD). Join us during the Annual Meeting breakout session, “National Rural Health Day and the Power of Rural” on Wednesday, September 7 at 3:30 pm, for a discussion on how to leverage NRHD and the “Power of Rural” key messages to disseminate information, build partnerships and document the impact of rural programs in your state. Session participants are encouraged to take part in the discussion by sharing ideas and providing input on how best to support SORHs and community efforts for NRHD. Read More 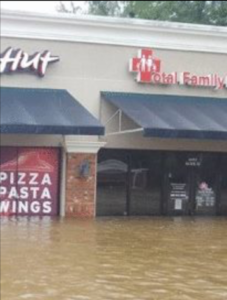 “Thanks to the SORH Grant and our relationship with these providers, we found out immediately and were able to assist them in getting relocated and retain their licenses,” Ingram said. Both RHCs were back up serving rural citizens in alternative locations within four days of being flooded. Read More

The Region B meeting was held in th

e great state of Tennessee last month. The meeting was full of informative presentations, beginning with learning about Tennessee’s long-term plans to address the state’s “BIG 4” : tobacco use, obesity, physical inactivity, drug deaths (in order). Tennessee is working to move their county health rankings into the top 10 in the nation. This region has been especially hard hit with hospital closures and several states shared stories on the community impact. Read More 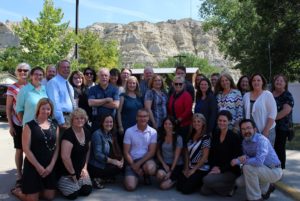 NOSORH committees are great focal points for engaging in many NOSORH initiatives. Descriptions of all committees and contact information can be found on the NOSORH website. Led by Past President Mary Sheridan, the Nominating Committee has released the information on the slate of officers to be voted on at the NOSORH Annual Meeting next week. Thanks to Melissa Van Dyne (MO) who volunteered to run for President-Elect and Corie Kaiser (OK) who once again volunteered to be nominated as Secretary. NOSORH bylaws dictate SORH Directors as the voting members of the organization.  Read More 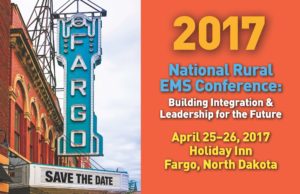 Join rural EMS leaders from across the nation for the 3rd annual National Rural EMS Conference! The conference will be held April 25-26, 2017, in Fargo, North Dakota.