i Nov 1st w No Comments x by Beth Blevins

Funding from HRSA’s Rural Communities Opioid Response Program (RCORP) program has helped several State Offices of Rural Health (SORHs) recently start—or strengthen—their work related to substance use disorder and opioid use disorder (S/OUD). Those who receive the RCORP Planning grant have a year to create or strengthen a consortium focused on SUD/OUD. (HRSA currently offers an RCORP Implementation grant that some SORH have received as well.) 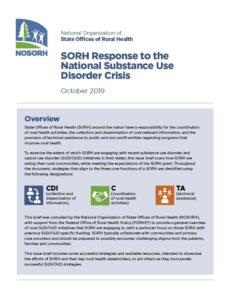 The new “SORH Response to the SUD Crisis” issue brief provides a scan of what SORH are doing to engage in the recent substance use disorder (SUD) and opioid use disorder (OUD) initiatives in their state.

For example, the South Carolina Office of Rural Health (SCORH) had never focused on S/OUD activities prior to receiving the RCORP Planning grant, according to Lindsey Kilgo, SCORH Director of Network Development.  For them the grant was “about how we can understand what’s going on in the state,” Kilgo said. “There’s been a lot of information gathering, a lot of consortium and office conversations, a lot of convening and bringing folks together.”

While creating their consortium, the Virginia SORH (VA SORH) discovered new partners. “There are additional people at the table who might not have been there because of the consortium,” said Heather Anderson, VA SORH Director. “We added to the conversation and got community health centers and other folks that maybe weren’t involved before. We have stronger partnerships in the region.”

Anderson continued, “Because of our experience with the planning grant, another agency was willing to run with the implementation grant. So we said, ‘Go for it. You’re local, you know all the people. We will support you any way we can, give you technical assistance, and help you convene people.’”

For the Michigan Center for Rural Health (MCRH), the planning grant “has allowed us to really bring everybody to the table and wrap our arms around the importance of the challenges in those counties we are working in,” said Crystal Barter, MCRH Director of Performance Improvement. “I think everyone has really bought into it, whereas before everyone was working in their own silo. And now we are working as a consortium and starting to leverage the resources each organization has.”

Hanneke Van Dyke, former SORH Coordinator at the Texas SORH, also talked about the importance of community outreach. “It was important to use relationships we already had and having an openness to expanding relationships to new project areas,” Van Dyke said. “In both of our (RCORP) project areas, community advisory councils—made up of community members and community leaders who are there for every step of the process—have been central. Making sure we built in a few back routes tied back to the community was very important for us.”

No Prior Expertise Needed

When asked what skills are needed for SORHs to engage with S/OUD work, Kilgo replied, “Having the determination to make things better and to make change—and then not being afraid to ask questions, in an effort to build knowledge, partnerships, and relationships.” Kilgo added, “For folks who work in this particular realm, it requires a level of passion and commitment. And when you have that shared passion and commitment, the relationship and trust come fairly easily. We all have a common vision and common theme. We’re moving forward together in a positive manner.”

The ability to seek out experts was also key for Van Dyke. “None of us on staff had worked on an S/OUD issues or had any particular training or experience with it,” she said. “As project coordinator, I’ve taken it on to educate myself through reading and talking with experts. I’m not an expert but I’m pretty comfortable now, knowing who to go to to get the right information.”

Although the North Dakota Center for Rural Health (NDCRH) has been involved with S/OUD activities for the state for a few years, they had no broad expertise in their office when they started their RCORP work, said Lynette Dickson, NDCRH Director. “Our knowledge has grown and continues to grow,” Dickson said.

“Even if you are not an expert in the field you can still have an impact in this arena,” Dickson explained. “Because what we (SORHs) do is convene people, and reach out and find the resources. You can have more confidence that you can have an active role in this—you can convene and connect like we do with anything else.”

For more information, see the new NOSORH Issue Brief, SORH Response to the National Substance Use Crisis. A full spectrum of NOSORH resources to address rural SUD/OUD are available in the Rural Opioids Educational Resources library on the NOSORH website.

i Apr 22nd w No Comments x by Ashley Muninger 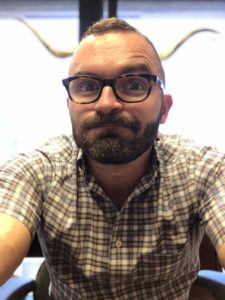 Favorite thing about working at a SORH: The people I get to work with every day.

What I’m working on right now: We are currently working on regionalizing our hospitals and restructuring TX SORH to leverage those regions/networks to implement our projects/technical assistance/outreach.

Best advice I ever received: You don’t have to know everything.

If I weren’t doing this, I would be…remodeling/flipping houses.

3 great things about rural health in my state: The people, the places, and the fact we are Texas! Yeehaw!

What I’m currently reading: I was going to read Teryl’s autobiography, but Graham gave me the CliffsNotes.

Who inspires you? People who are caring and understanding.

What’s your secret talent? According to a quiz I just took online, my secret talent is dancing. “Inaccurate” does not even begin to describe the results of that quiz.

People would be surprised if they knew: According to 23andMe, I have more Neanderthal DNA than 99% of their customers (maybe this won’t be a surprise to some).

i Sep 4th w No Comments x by Beth Blevins

At a rural hospital in Texas last year, a woman’s life was saved when doctors, using a handheld ultrasound device, determined that her abdominal pain was due to a ruptured ectopic pregnancy and were able to act quickly to address it. 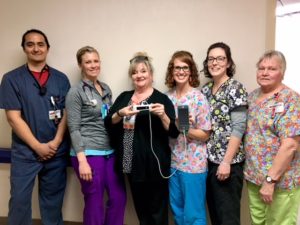 The hospital had the handheld unit on-loan as part of an innovative pilot project run jointly by the Texas State Office of Rural Health (TX SORH) and the Texas Tech University Health Sciences Center (TTUHSC). The devices, as well as accompanying training, were offered to Small Hospital Improvement Project (SHIP) hospitals in the state.

TX SORH had received approval from the Federal Office of Rural Health Policy to use $95,000 in unencumbered funds from their 2015-2016 SHIP grant for the project, according to Shari Wyatt, Rural Health Specialist at TX SORH. “We had asked ourselves: ‘what can we use this funding for that will help hospitals?’” Wyatt said.  “The GE Vscan Extend handheld unit had just come out. It’s an innovative piece of equipment that a lot of hospitals hadn’t used or even knew about.” 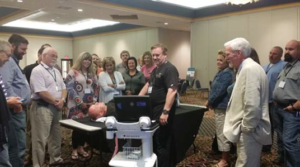 A Texas hospital participates in a training session.

“I love new technology,” Wyatt continued, “but if you don’t get it into the hands of the rural providers and clinicians, they never know about it. Some of the big vendors don’t bother with small rural hospitals—when you’re rural, you’re the little dog. They’re not really going to pay attention to you. That’s another reason I wanted to do it, so rural hospitals actually got to try out new technology to determine its usefulness in their facilities.”

TX SORH contracted with TTUHSC on the two-year project to help provide training on the devices. “Our state is big so we divided it into four regions,” Wyatt explained. “Texas Tech and I went to those four regions along with a sonographer from GE who did basic training on using the handheld unit.” Providers who could not attend in person were invited to participate in webinar training on the device, she said.

With TX SORH funding, eight Vscan Extend devices were purchased by Texas Tech to deploy to the hospitals that had been trained, for a one-month trial period each. A total of 67 hospitals signed up. 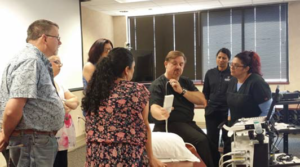 “They could use it anyway they wanted to for four weeks—any department, any doctor, nurse, or health care professional,” Wyatt said. “We only asked them to complete a brief evaluation sheet and send it back when they returned the device.”

The project was completed in July 2018, and TX SORH recently received the project completion report. The report reveals that more than 90% of the hospitals found the unit to be extremely helpful, and that the device was used mostly for abdominal scans and OB concerns. In addition, users found that the device was helpful for easier IV placement, for quickly scanning a patient for vascular effusion, and for checking an accident victim for fluid in the abdomen, helping avoid more costly, time-consuming imaging studies.

TX SORH negotiated with a vendor and obtained bulk discounted pricing for those hospitals that wanted to purchase the devices after the trial period. “This gave them the ability to purchase handheld ultrasounds at a price they could afford,” Wyatt said. As a result, several hospitals bought the units, with others planning to purchase the device with future SHIP funding.

“Through the negotiation we also were able to provide one year of online ultrasound training with SonoSim for all employees at the hospitals that purchased the devices,” Wyatt said. “I think online training will make a difference. A lot of the doctors really liked the device, but they wanted additional training for it.”

This is not just a one-time project, Wyatt added. The units purchased for the initial training project will be used in future training initiatives as well, she said.

“Many small, rural hospitals are financially hurting and don’t have the means to purchase innovative equipment, or get the opportunity to try out new products,” Wyatt said. “The handheld unit project gave the hospitals’ providers the ability to use the technology and determine its usefulness within their facilities. I feel that these are the types of projects that truly benefit rural hospitals.”