i Mar 2nd w No Comments x by NOSORH

During the week, NOSORH spent multiple days meeting with members and staff on Capitol Hill. With the prospect of major rural health legislation being advanced by Congress this May, NOSORH used the visits to remind Congress on the importance of rural health and advocate for continued funding for the SORH and Flex programs. It is anticipated in rural health circles that Congress could advance rural health legislation as part of a larger health package, including surprise medical billing.

A highlight of the NOSORH effort during the Institute was presentation of the NOSORH Legislator of the Year Award to Representative Kurt Schrader (OR 5th District). This award recognizes an outstanding individual federal legislator for their work and support of rural health initiatives that address national rural healthcare needs. Congressman Schrader’s district runs from the Pacific Ocean to the Cascade Mountains with 22 certified Rural Health Clinics, 6 rural hospitals, 17 rural EMS agencies and 2 tribal clinics. He is a leading member of the House Energy and Commerce subcommittee on Health and in 2018 was 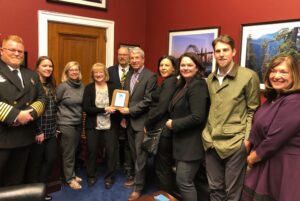 the lead Democrat sponsor of the State Offices of Rural Health Reauthorization bill.

The award was presented by Bob Duehmig, Deputy Director of the Oregon Office of Rural Health, during a meeting of rural Oregon constituents and members of the Oregon Office of Rural Health. “It was great to see Bob and his state team getting right to the heart of what matters in rural Oregon with Representative Schrader. Bob facilitated the discussion with each member of that state team ready with simple, meaningful input for Mr. Schrader,” said Eisinger.

Duehmig was one of the 46 state coordinators NRHA taps to help organize Hill visits during the Institute. Ten other SORH also served in this role. Thanks to the NRHA for sharing data and their great work of making our voice louder and building the momentum!

i Mar 4th w No Comments x by NOSORH

Senator Pat Roberts (R-KS) was recently recognized as the NOSORH 2018 Legislator of the Year for his sponsorship of the SORH reauthorization bill. Cynthia Snyder, Director of the Kansas Office of Primary Care and Rural Health, and Teryl Eisinger, NOSORH Executive Director, presented his award at the NRHA Policy Institute last month. Senator Roberts met with NOSORH representatives and shared his experiences and vision for rural health.  “Senator Roberts has been a champion for rural health throughout his career,” said Snyder. “He has made tremendous strides to improve the quality of rural health care and access to it. I’m pleased that NOSORH has recognized his numerous achievements in this area.”

Other State Offices of Rural Health were also well represented at the Policy Institute. A NOSORH members meeting at the Institute included updates from FORHP with information on upcoming new programs, discussion of the NOSORH request for additional appropriation and a toast to Andrew Coats and the Policy Committee for their efforts in achieving SORH reauthorization.

With the 35-day shutdown throughout January, funding for the fiscal year 2020 budget and appropriations cycle has been pushed back a month.  The President’s budget request, which is normally released in early February, should be released by mid-March. The late release date provides Congress with a tightened window to pass FY 2020 spending bills by the start of the new fiscal year, October 1, 2019. It has been reported that President Trump will propose a five percent cut to non-defense discretionary spending in his upcoming budget proposal to Congress. “With House Democrats supporting spending increases to non-defense spending, the President’s proposal won’t survive Congress,” said Andrew Coats, NOSORH’s Legislative Liaison.

On February 4, the Health Resources and Services Administration’s (HRSA) Federal Office of Rural Health Policy announced plans to award approximately 75 grants of up to $1 million. The grants would seek to expand opioid and other substance use disorder services in high-risk rural communities. The grant award will cover a three-year period and require awardees to implement a set of core substance and opioid use disorder prevention, treatment and recovery activities that align with HHS’s Five Point Strategy to Combat the opioid crisis. All domestic public and private entities, nonprofit and for-profit, will be eligible to apply. The services must be provided in a HRSA designated rural area. HRSA intends to release a notice of funding opportunity in the coming weeks.

CMS Unveils Overhaul of Medicare Payment for Emergency Treatment
On February 14, CMS launched a voluntary payment experiment, the Emergency Triage, Treat and Transport (“ET3”) model, allowing first responders more flexibility to treat patients on the scene, through telehealth or at an urgent care clinic. CMS will pay participating ambulance teams to transport patients to hospital emergency departments, transport patients to other settings like a primary care physician’s office, use telehealth or provide care on the scene under supervision of a qualified practitioner. Currently, Medicare reimburses ambulance providers if they transport patients to the hospital, skilled nursing facility or dialysis center. The voluntary demonstration will likely begin in 2020 and run for five years. CMS will phase in the model across the country and will phase it to 30 percent of emergency room visits.

The Advancing Care for Exceptional Kids Act is intended to make it possible for home health providers to coordinate care, lower costs and improve quality outcomes for children with complex medical conditions on Medicaid who require specialized care. The bill (S. 317) was referred to the Senate Finance Committee, which has jurisdiction over Medicaid.

Back to March Branch

i Jan 14th w No Comments x by NOSORH

The 2019 National Rural Health Association Policy Institute is in Washington, D.C. on February 5-8, and NOSORH has resources to help you prepare for the conference. NOSORH will be hosting the webinar “Preparing to Engage with Legislators & Policymakers” on January 17th at 1:00 pm ET. This webinar will focus on understanding the environment on Capitol Hill, SORH legislative priorities for the new Congress, and how to “orient” new congressional members (and resources available) and conduct a Hill visit with state partners. Click here to register for the webinar.

In addition, one-page state profiles, like this one from South Carolina, are available to help SORH document the impact of their work. For help in completing your state’s profile, please contact Donna Pfaendtner at donnap@nosorh.org no later than Friday, January 25, 2019. A SORH factsheet will be provided for your use at the Policy Institute and Hall Render staff will be available to join you on Hill visits.

While in D.C., be sure to attend the NOSORH Members Meeting on Tuesday, February 5th at 6:00 pm ET in the Capitol Room. Stay tuned for more details about this meeting.

Back to January Branch